Most campaigns are designed to drive some specific behavior, like making a purchase or getting users to return to your app. The Goal tab is where you choose your goals and conversion settings for every campaign.

The Goal category helps you organize your campaigns in the overview table. When setting up your campaign, choose a category that aligns best with your end goal for this specific campaign.

Filter by Goal Category in the Campaign Overview page

To view all campaigns that share a similar goal, you can filter by Goal Category by clicking the filter icon at the top right corner of the screen.

Users can convert at any point during the campaign or Attribution window. Your campaign's analytics tracks every conversion event metric. 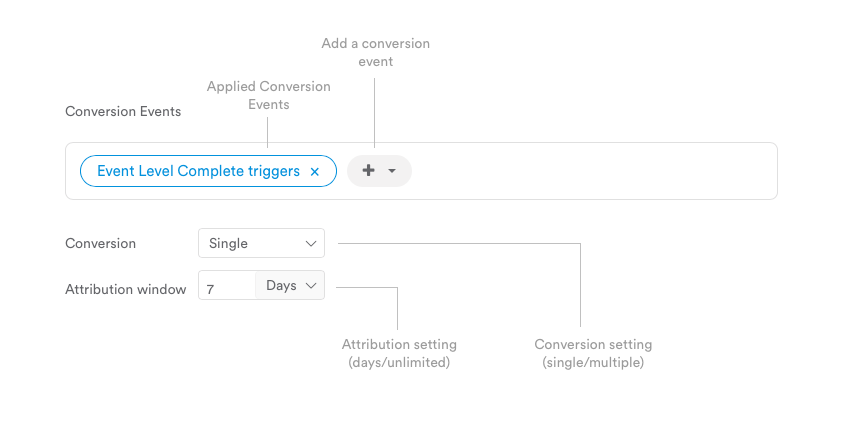 When a user completes the conversion event, they are exited from the campaign and don't receive any further actions. (However, users can re-enter the campaign if they complete the entry trigger again.)

When a user receives the last action they're eligible for in a campaign, the Attribution window determines how long afterward you can count their activity toward your campaign's conversion metrics.

Users cannot re-enter the campaign again until the Attribution window ends for them.

The Attribution window begins when a user receives the final action or message for them in the campaign (i.e., there are no more messages or actions that particular user can receive).

It could be a user's final action for any reason:

Users can re-enter a campaign multiple times, but only after they finish both the campaign and the Attribution window. To prevent campaign re-entry, you can set an Entry Limit of one entry per user.