If a user triggers multiple in-app messages at the same time, priority levels allow you to choose which message is most important to display.

Without in-app message prioritization, a user who triggers multiple in-app messages off the same "Display trigger" event will see one of the messages at random.

When a user qualifies for and triggers multiple in-app messages at the same time (based on the Display trigger event), our SDK will deliver the message with the highest priority level and mute all other messages. Muted messages are not displayed, so they will not have View events tracked.

If the triggered messages have the exact same priority level, then only one of the messages will show at random.

Leanplum checks message priority after the message "Targets" and "Display trigger" settings are evaluated. This means that each user will see the message with the highest priority of all the messages that they qualify for. For example, one user may fit the target group for a priority 1 message, while another user only fits the target for your priority 3 message.

In the Delivery step, set Priority value, Priority can be set from 1 (highest) to 999 (lowest). If not specified (left as "None"), messages are assigned a default priority of 1000 (the lowest priority). 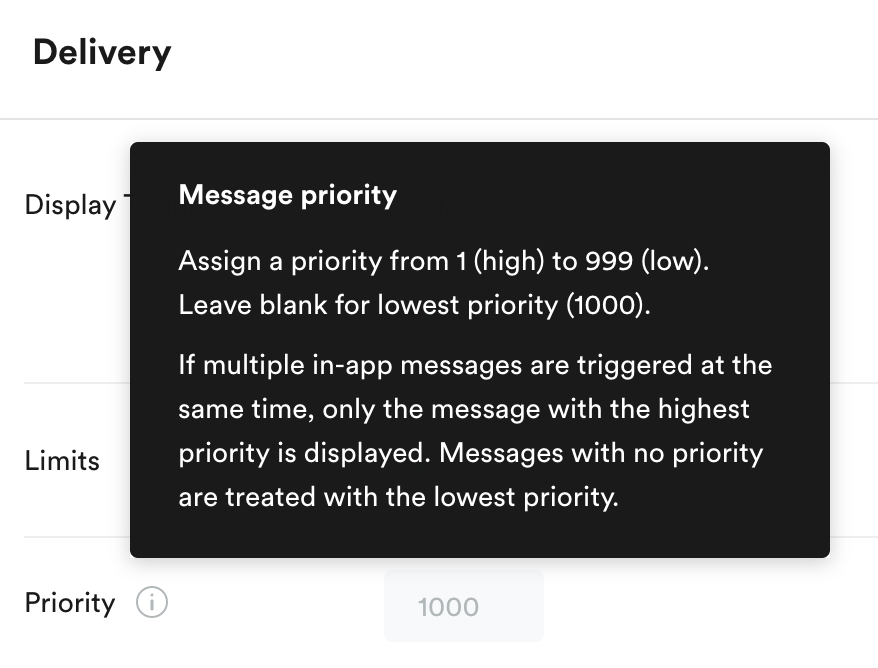 Let's say we have the following in-app messages activated, all of which are set to display when “User starts or resumes app." Each has been assigned a priority of 1, 2, or 3.

IAM prioritization is supported on Leanplum Android SDK 1.2.25 and higher and Leanplum iOS SDK 1.3.12 and higher. If your end user is still using a version of the app with an older SDK version, then the priority field will be ignored, and all messages will be treated as if they have the same priority level (only one will show at random).