Leanplum makes it easy to engage with users throughout their journey with your app. When creating messages in Leanplum, you have the option of creating stand-alone messages or creating messages within a Lifecycle Campaign. Which option should you go with, and when?

If your message only applies to one thing, such as a sale tied to a specific date, consider a stand-alone message. These might include a scheduled in-app message promo, a new feature announcement push or an app update push. From the Messaging dashboard, click Create Message to get started.

However, some of the strongest messaging strategies are ones that drive users to a specific milestone in the experience. That's where Lifecycle Campaigns come in. These campaigns run continuously and guide each individual user to the desired milestone, or Exit Trigger. Exit triggers could include Completing Onboarding, Purchasing, or Re-engagement. Users receive a series of automated messages in the Lifecycle campaign until they reach the Exit Trigger. From the Messaging dashboard, click Create Campaign to get started. 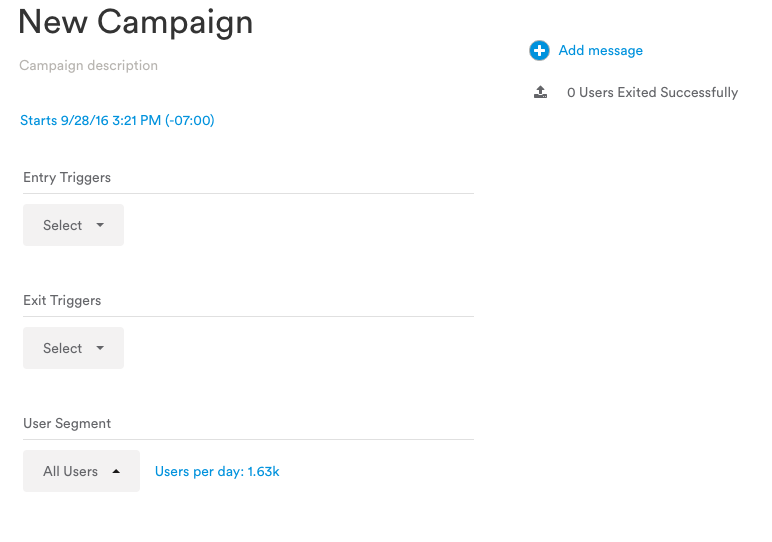 For more information on how to set up a lapsed users Lifecycle Campaign, see here.

How do I convert current messages into Lifecycle campaigns?

Go to your existing triggered messaging that you would like to convert.

Only triggered messages can be converted into lifecycle campaigns. Click on the more button in the upper right corner “Move to Lifecycle Campaign.”

Once your option has been selected, click ok. You will then be taken to the new Lifecycle campaign or the existing one that the message has been added to.