Rich in-app messages are based in HTML5, which offers more customization options than some other in-app message templates. Some of the added features include:

See below for details on each type of Rich in-app message.

The Star Rating survey is a great way to gather quick feedback from your users. You can present a single question at any time: about a product they bought, a new feature they tried, or a video they just watched. 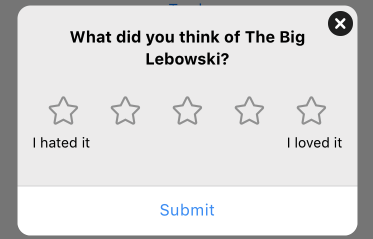 The Banner template is a full-width, typically thin message that can appear anywhere on the user's device. It allows user inputs to other areas of the screen (unlike the Star Rating and Rich Interstitial), and its background can even be set to transparent (for things like tooltips).

You can even add animated images as the background image for an animated banner.

The Rich Interstitial is a more powerful version of our Interstitial in-app message. It can support up to two buttons (each with their own open action setting), as well as a close x button in the top corner. This allows for a common user interaction: a "decline, accept, or close" message often seen with terms and conditions. 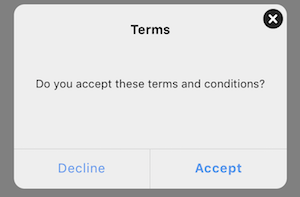